Back to Buddhist Observation Dates

The Asalha Puja Day (อาสาฬหบูชา) is the day on which the Lord Buddha preached the First Discourse to the Five Ascetics at the Isapatana in the Dear Park near Benares. Usually, it is held on the Full Moon Day of the eighth lunar month (July). All Buddhists in every part of the world annually celebrate such an important day of the Asalha month.

After having attained Full Enlightenment, the Lord Buddha determined to teach the world. But he thought that the Truth or Dhamma, discovered by him is profound, sublime, difficult to understand and not easy to preach to lustful and ignorant persons. Were he to teach the Truth, others would not understand him, fatigue and weariness would be his. So his mind was inactive and there was no wish to teach anyone.

But he realised that there were at least a few who had only a little dust in their eyes and were capable of cultivating virtue and developing wisdom together with understanding the suffering of beings, and he wished to relief them of their burden. Out of great compassion for the many, he decided to devote himself to the dissemination ofthe Truth which he found. On deciding to present the Truth to the world, he surveyed the persons worthy of his teaching. He at first found that two great teachers, Alara  Kalama and Uddaka Ramaputta, were worthy of being taught but they were now dead. After these two great teachers, he sought out his old companions in struggle, the Five Ascetics, namely Anna Kondanna, Vappa, Bhaddiya, Mahanama and Assaji, who had been of the greatest assistance to him during the practice of self-mortification. Then he knew that these five were staying at Isapatana, the Sages’ Resort, where he went, and first made known to them his discovery of the Truth. The day on which the Proclamation of the Truth was made by the Enlightened One was the Full Moon Day of the eighth lunar month. It is at present called Asalha Puja the celebration of which is held on the Full Moon Day of the eighth month of the year. The importance of this day is due to the fact that it is:

a. The day on which the First Discourse was preached by the Lord Buddha,

b. The day on which the first monk was ordained;

c. The day on which the Proclamation of the Doctrine to the world was made by the Lord;

d. The day on which the Triple Gem was completed, and

e. The day on which the First Disciple attained the dustless, stainless eye of Truth.

Source of information on Asalha Puja: From Puja Book by Bhikkhu Cattamalo

Below is a video from YouTube that contains the chant and translation of Dhammacakkappavattana Sutta: 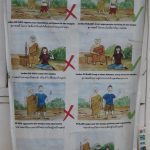 Do and Don’ts when you see a Monk in Thailand 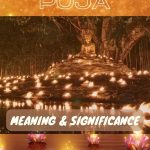 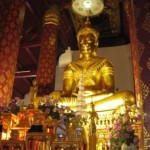 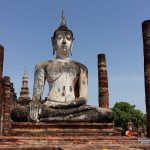 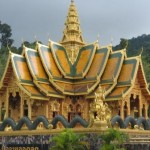