I happened to be Thailand the few times where there is political issues happening there. There was a trip that I had wanted to take whereby prior to the trip, a number of concerned friends were worried about the political instability in Thailand. From the airport, I could see that even the local Chiang Mai’s local English newspaper indicate the instability ahead. 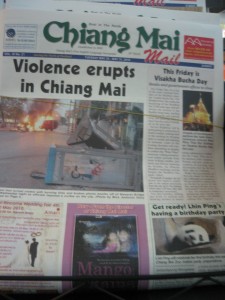 But as the many times that I happened to be Thailand- I was there during a riot in August 2008, when the airport closed in Nov/Dec 2008 and years prior to that, a demonstration in Thailand- things reported in the news are not what it seemed when you are really there. I even walked past Sanam Luang once when there were demonstrations going on- that time, with other tourists, we had not idea what was going on as we cannot understand the news in Thai. Of course, the downside is that if you are planning to make the trip, insurance companies would not want to cover you under travel insurance.

What saddens me is that all the events- that is mainly an internal affair had badly affected the tourist industry. The Chiang Mai night bazaar saw a huge drop in business- I met a Malaysian lady who was in Chiang Mai last month and a regular shop that this lady went to told her that business had been really bad. That time was a curfew going on but it only started from 1am onwards. By then, she was already asleep in her bed.

For those frequent travelers, they are still visiting Thailand as if there’s nothing going on. I remembered when the Suvarnabhumi airport closed in Nov/Dec 2008, the Cha’am beach was so quiet and most of the hotels were empty. People whose livelihood depended solely on the tourism industry were really affected- anyone from the roadside peddlers, van/bus drivers, hotel workers, etc. Already, their earnings are low.

Well, sometimes we would need to be willing to leave our comfort zone in order to really experience life. I always believe that when our time on earth is up, we will go from where we are….even right in the so-called safety of our own homes.

Beating Bangkok’s traffic jam by travelling in a river taxi