Many Thais know about Khao Khitchakut (อุทยานแห่งชาติเขาคิชฌกูฏ) but this place is relatively unknown to tourists. 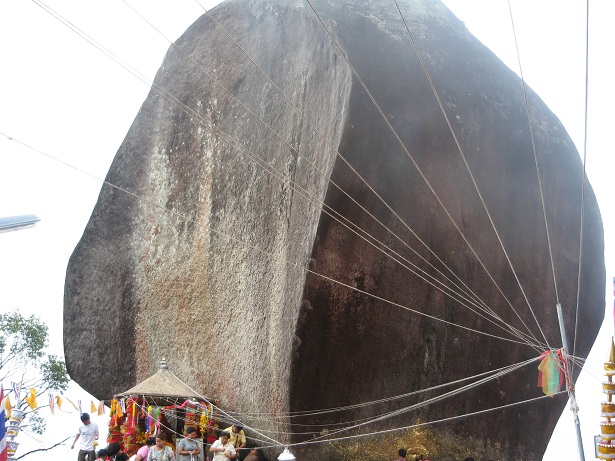 Khao Khichakut is a forest/national park/holy Buddhist pilgrimage site located near Chandrapuri (จันทบุรี)- about 2 to 3 hours from Bangkok. It is opened for about 60 days every year (sometime in January to sometime in March each). Then it is closed for the rest of the year to the public because wild animals like monkeys and tigers will roam the area.

There are 2 rounds of pickup truck (causing about 50 baht per person per round) that you need to take in order to go up from the base of the hill. After which, you will need to hike up about 1 to 2 hours. As there is no specific buses going there, you would need to know someone who know about the place to take you there. 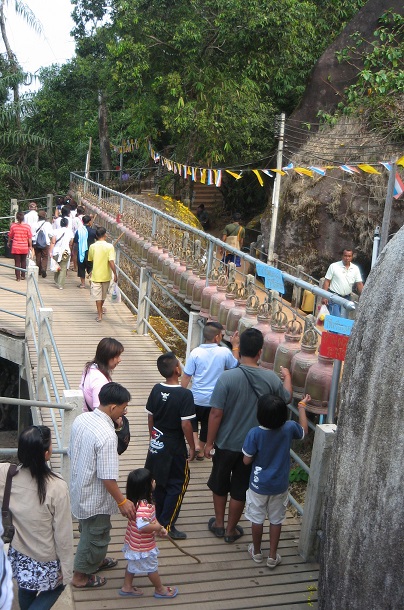 It is best you hike in the evenings or night when the sun is down so that it is more cooling. Don’t worry, there are flourecent lights along the way as many devotees had donated money to have water and electricity. There will be stalls selling drinks and food along the way- try to travel light. Most people who arrive there either choose to spend the night (blanket, pillow and mats are provided) or they pay respect to the Buddha’s footstep (picture on the right, where devotees stick golden paper on) located at the top of the hill and go down after that. 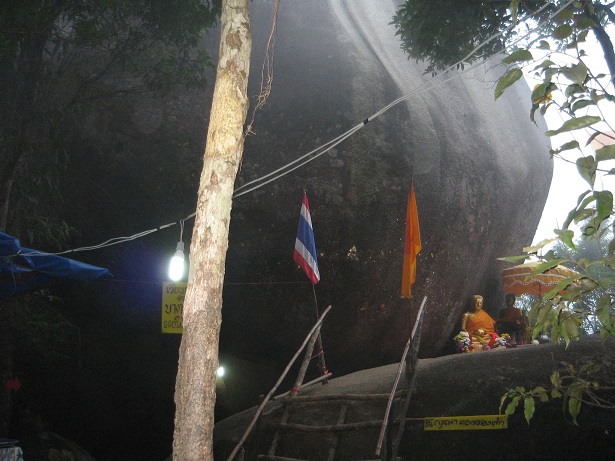 You will be able to see strange stone formations- the entire place has huge stones that looked as though they are stacked on top of one another. And the stones do not fall or move even though it looks as though those huge stones are balancing on a very thin line. Some of the stone had the shape of a reversed almsbowl. There is no other known areas with so much of stone formations.

There are people hiking up and down the hill 24 hours of the day- I was there on a weekday and at about 2.30am on Wednesday morning, I went for a walk and was surprised to see the place crowded with people.

What to bring if you intend to stay there:

Strange, but not everyone could make it there 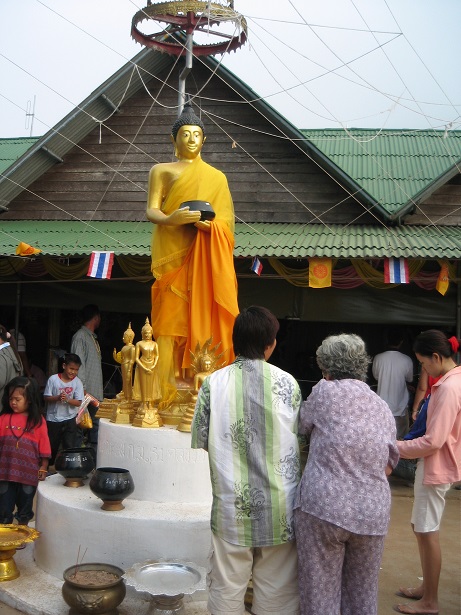 Many Thais tried to make the annual trip up to Khitchakut but there are many more Thais who had never been there. Some old people, with a cane, try their best to hike up, one step at a time- it’s inspiring to see how devoted they are. The picture on the left showed an old lady who made it up with a cane, paying respect to the Buddha. 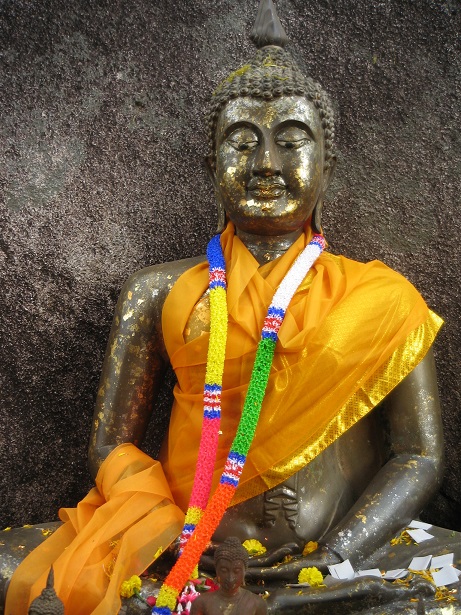 It is mentioned that if a person has lots lots of bad deeds, the person will not be able to make it up the hill to see the Buddha’s foot. During the hike up, they would either feel that they could not breathe, faint, fall down and broke something, making it not possible to make it up- even though the hike up is not that difficult. It’s a bit hard to explain because some young and fit people were not able to make it up there. Therefore, many Thais will pay respect at the base, ask for forgiveness and receive blessing at the base area. One of my friend’s friend (only in her twenties) could not breathe when she was hiking up, causing her to panic and had to stop going up.

Also, sometimes people can get really sick when they hike up or stay there. I stayed there for 2 nights and fell sick with fever, flu and no appetite to eat. Strangely, after I left the place, I did not fall sick during the rest of the trip. It is said that one expiate bad kamma there as well, so you can also see a number of people who felt sick while going there. But after that, they will get better. Sometimes, a person do get sick when going for religious pilgramage which does not neccessary be a bad sign.

One of my friends and I also had strange dreams when staying there. We dreamt about bad things we have done as well as someone telling us our darkest secrets. I don’t think it’s meant to scare us but for the purpose to make us realise our wrongdoings and try to change for the better.

Another friend who went with us, fell down and hurt her knee when she was walking and joking with her daughter. After a few days, the bruise on her leg was quite bad and noticeable. Do remember at any worship sites of any religion, avoid uttering any bad comments, complaint, jokes (especially dirty jokes)-it’s best to keep them to yourself. If possible, don’t let these thoughts cross your mind.

Staying there.
There is chanting and blessing by monks around the clock played at the speakers. Therefore, the sleeping area is not quiet but many people don’t seemed to mind as the chanting calms and soothes the heart. Everyone sleep in an open sala (hall). There are a number of toilets for bathing located downstairs of the sleeping area. 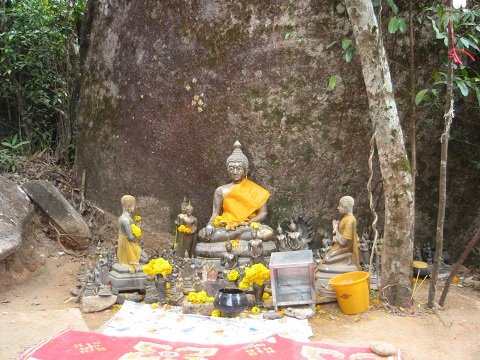 The signboard did mention that Khitchakut is a national park, so from the sleeping area, you can hike further up and in. The hike to the deepest part of the area will probably take you another 2 to 3 hours, depending on your speed and stamina- for that, you should not be hiking at night as there will be no lights at some areas and those inner stores will be closed in the evenings. Along your way, you can see Buddha statues and more strange stone formations- mostly with the shape of an inverted almsbowl.

Mae Sai- shopping and border between Thailand and Myanmar