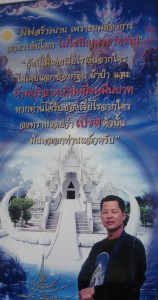 Acharn Chalermchai Kositpipat is an extremely talented person who built Wat Rong Khun- a well known and must visit place if you travel to Chiang Rai, Thailand. If you go to Wat Rong Khun the absolute beauty and artwork will just take your breath away. I have great admiration for Acharn Chalermchai.

From young, Acharn Chalermchai was exceptionally talented in drawing from a very young age. He came from a poor family. But he grew up, he became extremely successful because of his unusual talents- his paintings tell a story in a very profound manner. I remembered the first time when I went to Wat Rong Khun, I had decided against to buy a large book containing pictures of his paintings. It was a decision I regreted- so when I went back again for the second time, I immediately brought the book.  When I look at his paintings, I felt as if my mind just expands and growth. His paintings, especially those of the beautiful scenes of the heavens, really inspired me.

He was directly involved in the construction of Wat Rong Khun- the carvings and the design of the temple is so detailed thought out. He dedicated his life to continue with the construction so long as he is alive.

I remembered the first time when I was visiting the temple, we went to the main hall. As I came out and my friends were looking at the scenery, I found someone was doing a stuco of a dragon at the front. At the same time, the person looked up and I thought that I had seen his face somewhere before. 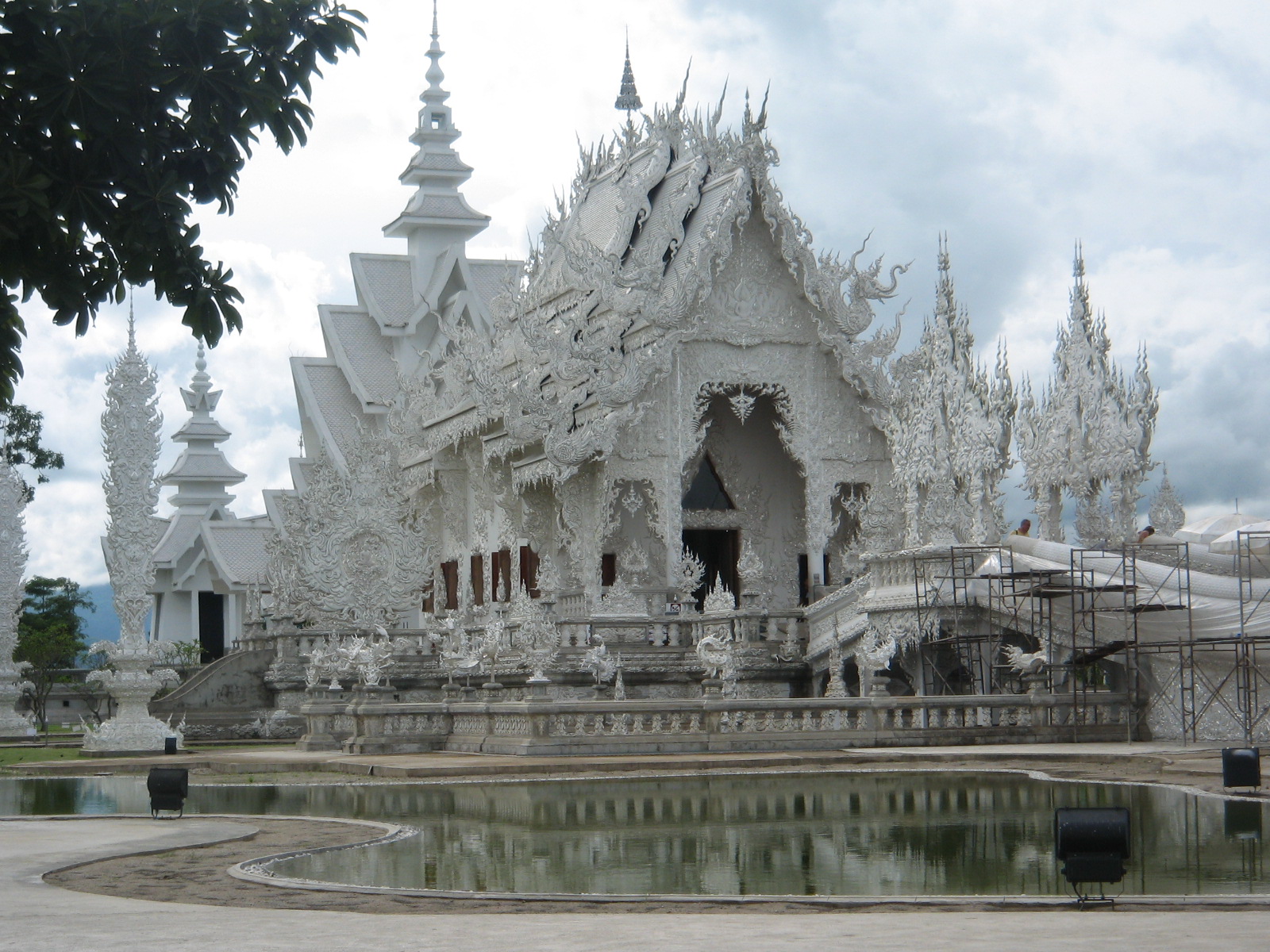 Then we walked around and when I arrived at the poster (the picture above)- I wondered if it was the man himself who was working alongside the workers. I thought I must be mistaken. But later, when we came out, he was resting and called out to my teacher, whom he knew personally. He dressed like one of the workers and most of the tourists just pass him by without recognizing him. Our group was lucky to have the chance to speak to him. I got to ask him a question because inside the hall, he drew a painting which I wanted to know the meaning (we were not allowed to take pictures in the hall).

The wall painting contained picture set in space  of a monster with tentacles holding things like watch, handphone, nuclear rockets and weapons aiming and shooting at earth. There was a picture of a man in dark glasses- dressed like in the movie Matrix- standing on the monster. Then, I could see earth, with volcano and nuclear explosions.

Here are the gist of what I remembered: He mentioned that most of us are obsessed about material things such as handphone, time, etc. These things should only serve as tools to be used- and not to be attached to. Like in the movie Matrix, when things happened are unreal- even so, the mind is being obsessed by things that are not real. By illusions. People are constantly fighting because they only look and judge on the outside, but not on the inside. Because of that, they fight because they want to claim ownership of things. That is why the world is so hot. If everyone was to look inside, follow the teachings of their respective religions- there will not be fighting and war. 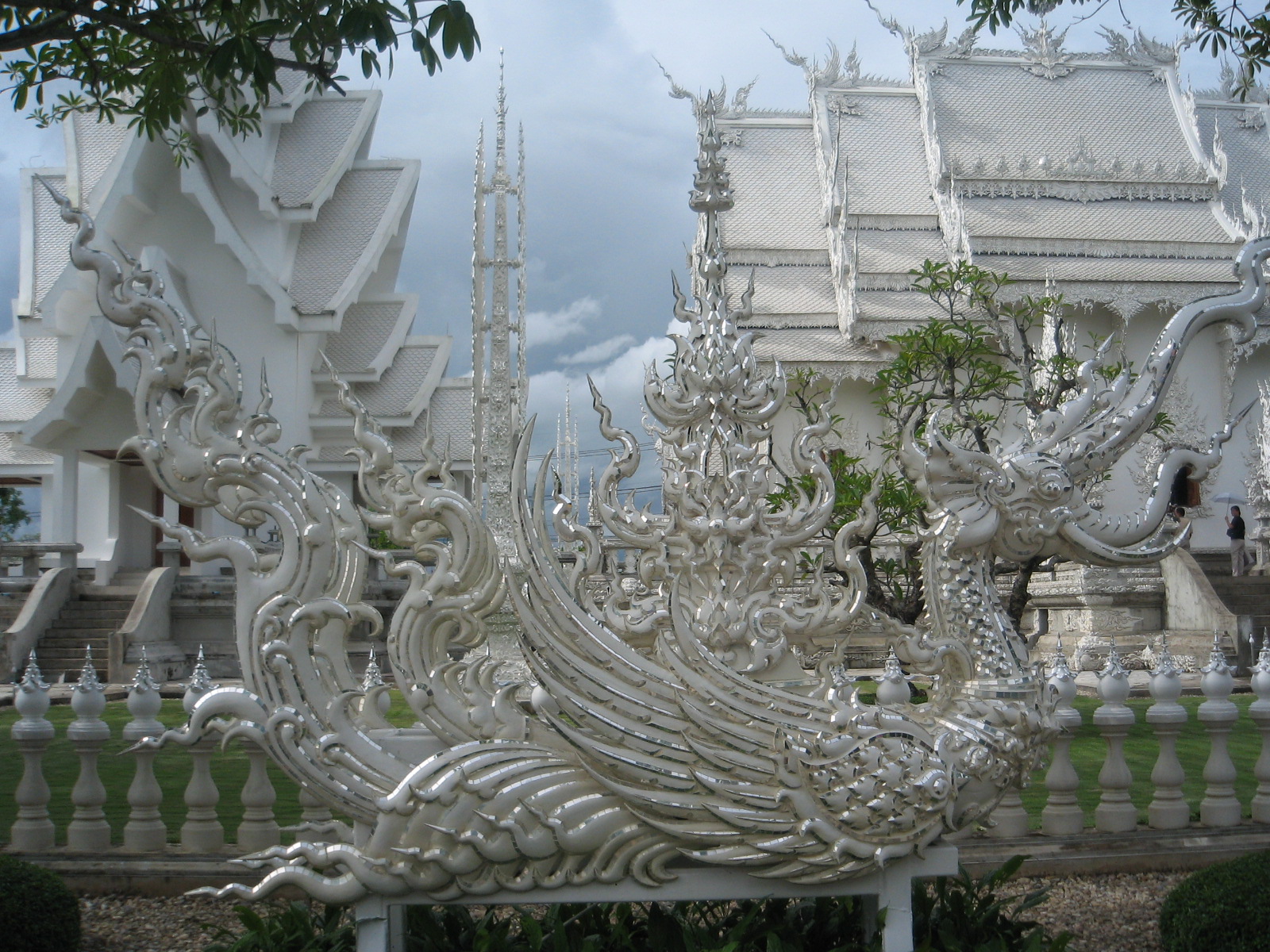 The temple is self- sufficient- it supports itself through sales proceeds from Acharn’s paintings, Tshirts and books. From the proceeds, it is channeled to built the temple. Here are some quotes taken from the book “Creating Buddhist Art for the Land” which I had bought from the temple. The book contains the history of the temple and a brief autobiography of Acharn Chalermchai:

“I declare that I will not accept a donation of over 10,000 baht from anyone for I do not want rich people to donate a large sum of money, which will give rise to the power to own the temple and to give orders.”

“Wat Rong Khun has never handed out envelopes to put in money for the Kathin or pha pa (ceremonies to present new yellow robes to Buddhist monks), nor solicited contributions from anyone. I would only accept the pure money from the faithful who have set their hearts on coming to see the temple, and then out of profound faith would like to constribute to its construction.”

“I spend a long time building this temple for I would like it to be a world-class beauty, not because I don’t have enough money. A stumptuous amount of money cannot create a work of art at world-class level if the work is to be finished in a hurry.”

“I have been preparing all my life so that everything would be worldly and spiritually ready. I wish to create a work of art as a priceless legacy for the country and the world before I die.”

One thing I truly admired in him is that he could have used the talent to earn him enough money to make him a multimillionaire. He has a talent unlike others- if you see his paintings, the message in it will really touch your heart. And yet, he chose to serve with his talent, working for long hours to built the temple (together with his chosen team).

Email: webmaster @ watrungkhun.com (remove the spaces when sending the email)

HomePro Thailand- supplies for home building, renovation, DIY, furnishing, electrical
Why we need to cover up when visiting temples in Thailand
Mae Sai- shopping and border between Thailand and Myanmar
Wat Mahathat Sukhothai
Spread the love

Lockdown in Thailand and news

About Nakhon Sawan นครสวรรค์- the beautiful abode above the clouds