Also known as Wat Bowon, this temple is located at Khao San area. 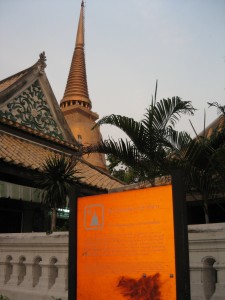 Here is what has been written on the orange signboard:

This monastery is a first grade royal temple of Ratchaworawhiharn, which was built in the reign of King Rama III, by Somdet Phra Woraratchao Maha Sakdiphollasept during 1824-1832 and this former name was Wat Mai in 1836.
King Rama III had invited his younger brother, Prince Mongkut (later Rama IV) in monkhood resided at Wat Rachathiwat to rule this temple, and named it Wat Bowonniwet Wiharn.

In the reign of King Rama VI, the nearby temple Wat Rangsi Sutthawat, and Wat Bowonniwet Wiharn were amalgamated into one temple in 1923. Enshrining Phra Ubosot is a Brazen Buddha imanged named Phra Phuttha Chinnasi in attitide of subduing Mara posture. (shown in picture below) 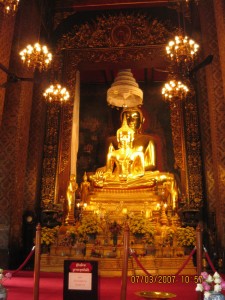 Personally because I enjoy going to temples- I really like the environment in this temple and spent sometime sitting here in quiet contemplation. 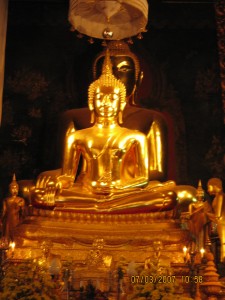 Various past kings, including the current king of Thailand had previously ordained here. 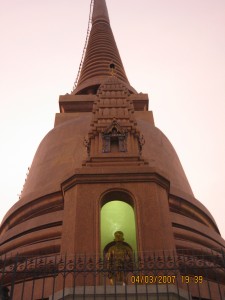 What a simple life by the river