Below are pictures from a beautiful temple that I’ve visited in Ayutthaya. I feel it deserved a mention because in the temple, it contained 3 Buddha images of 500 years, 1500 years and 800 years respectively. Please note that the information below is taken from a signboard located in the temple.

Locally known as Wat Na Phramane, the temple was built in A.D 1503 by Angel Indra in the Reign of King Ramathibodee II, the 10th throne of Ayutthaya, named Wat Phramerurachikaram. It is the royal Aram of the third rank, ordinary type.

The temple has marked a historical event in the reign of King Maha Jakrapad. He chose it as a meeting place to stop the war in A.D 1563. And another event happened in A.D 1760 when King Alongphaya of Burma come to attack Ayutthaya. The Burmese soilders had installed cannon at Wat Na Phramane and Wat Hassadawad (Wat Chang). King AlongPhaya commanded the troop and fired the cannon by himself. Unfortunately, the cannon exploded and the king was seriously injured. So the troop had to be withdrawn to the northern direction. No sooner had the troop left Tak (a town in Northern Thailand), the King passed away.

With the sanctity of Phra Buddhanimitwichitmara Molee Srisanphet Boromtrilokanat, the Main Buddha image in the Phra Ubosot, it has long been believed to help save Ayutthaya from it’s enemy always. Furthermore the Buddha image is still in the same condition as it was once as well the temple which is the only one that was not sacked by the Burmese. Hence, it is worthwhile visiting and appreciating its historical splendour.

Place and Object of Attraction

1. Phra Buddhanimitwichitmara Molee Srisanphet Borom Trilokanat, the main Buddha image cast in bronze, then lacquered and covered with gold plate is in the style of Subduing Mara clad in Kingly decorations. It is nine soks (arm-length measure) wide from one end to the other of its lap and six metres high. It is one of the biggest decorated Buddha image built in the early period of Ayutthaya. Its shape is so splendid with the explicit name of holiness and sacredness to respect for those of the three worlds. 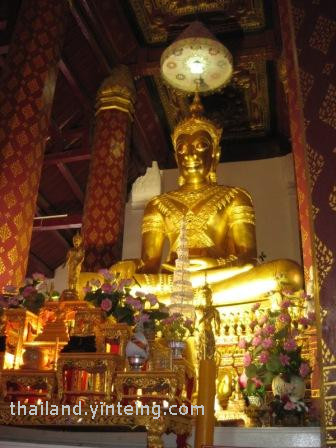 2. Phra Khandharat, Dvaravati period, is the biggest stone Buddha image aged around 1500 years old with 1.70 metres wide in lap and 5.20 metres high. The image was carved out of green sand stone in sitting position on the seat of the first preaching style. It was recorded that it was removed from Sri Laka when Phra Ubalee and the Buddhists delegates of Siamese sect went to establish Buddhism in Sri Lanka. Then Phraya Chaiwichit shifted it here from Wat Maha Tat in the Isle of Ayutthaya. 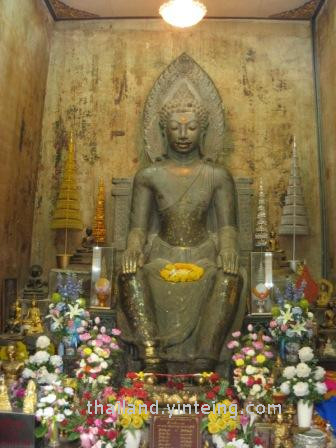 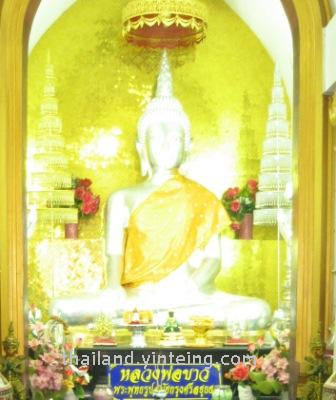 3. Phra Ubosot was built in the early Ayutthaya architectural style. From the outside it looks like the shape of a sampan (wooden boat) with 16 metres in width and 50 metres in length. The gable of the front entrance was carved out of teak wood in the design of God Naraya on Garuda stepping on Naga (dragon)’s head. On both sides of the naga’s head are two Rahu. The scene is surrounded by 26 praying angels. From the inside there are two roes of sixteen octagonal posts with lotus cornice which is typical of Ayutthaya style. The ceiling was also carved out of teak wood in the pattern of beautiful complex layer of stars.

The Bridge of River Kwai, Kanchanapuri