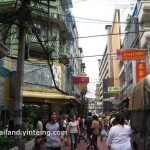 I happened to be Thailand the few times where there is political issues happening there. There was a trip that I had wanted to take whereby prior to the trip, a number of concerned friends were worried about the political instability in Thailand. From the airport, I could see that even the local Chiang Mai’s [...] 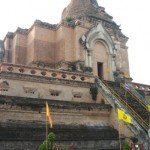 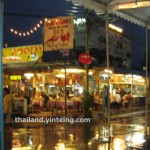 The Chiang Mai Night Bazaar (pronounced locally as ไนท์บาซาร์ or night baza) covers a huge area, comprising of several roads and alleys. Anything and everything that you could think of, from food, craft, clothes to household items can be found here. There is even McDonalds and Burger King- opening 24 hours a day, so you [...] 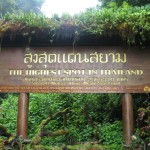 Doi Inthanon ดอยอินทนนท์ is located in Chom Tong district not far away from Chiang Mai. It is the highest peak in Thailand. If you go there, please bring along a jacket/long scarf as it can be very cold, especially in the months of July to January. Don’t go there in shorts- else you might feel so [...] 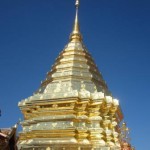 Wat Phra Doi Suthep (วัดพระธาตุดอยสุเทพ) is located up on the hills in Chiang Mai. From the base of the hills, you can rent truck taxis up. Kruba SriWichai (1878-1938) is known as the Buddhist Saint of Northern Thailand. A life statue is built at the base of the hill to Wat Phra Suthep- Thais come [...]